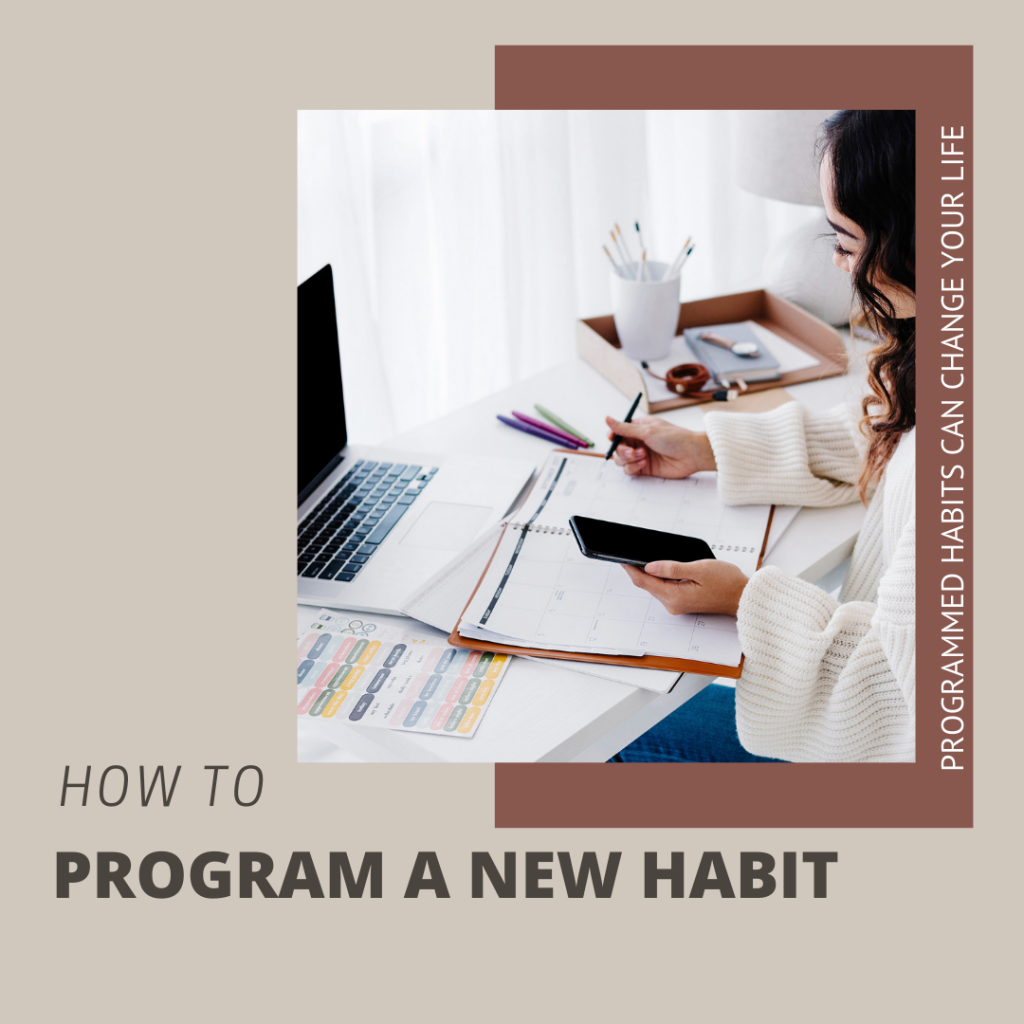 How to Program A New Habit?

Programmed habits are like rituals that we perform daily without having to give much thought to the behavior. Everyone has habits, good and bad. They affect our lives and contribute greatly to who we are. Programing a new habit isn’t always easy. It will take effort to make this desired behavior part of your everyday life. There are a few steps you can take that will help you form a new habit.

First, you need to set your goal by deciding on the one, and only one, new habit you want to form. Centering on just one new behavior at a time will increase your chances of success with forming the habit. If you try to change too many things about your routines at once, change becomes much less likely. Really focus on the one new habit you want to integrate into your daily life.

After deciding on the one new habit you want to have, you need to commit to sticking with it for at least a month. That means doing everything in your power to make sure you perform that specific behavior daily for thirty days. It’s been said that habit change takes hold in no less than 21 days. So, do your best to ingrain this habit into your everyday life for at least that long to ensure it sticks.

Another thing you can do to help ensure your new habit sticks is called habit stacking. It’s done by attaching the new, desired habit to an already existing one. Habit stacking makes it easier to remember to perform your new habit and helps instill it in your brain. So, say you want to start a new habit of daily mindful meditation. Try attaching meditation to the routine of brushing your teeth in the morning. After you brush your teeth, that’s always when you meditate. If you find a way to stack the new habit into an existing habit, you will have a greater chance of success.

Anticipate possible obstacles. There will be bumps in the road when it comes to trying to form a new habit. If you’re able to identify obstacles ahead of time, you can plan ways to overcome them before they happen.

Make small goals within your larger goal and reward yourself for staying on track. Giving yourself smaller goals to achieve along the way and rewarding yourself for those achievements will help solidify the new habit you want to form.

Forming a new habit requires time and some conscious effort. If you follow some of these basic steps you can take control of your daily habits, ultimately making you a happier person.

Changing A Habit Vs. Creating A New Habit

If you’ve given your habits some thought and you’ve decided that you would benefit from changing a few things, you’re not alone. No one is perfect, so most people would benefit from rearranging some of their habits. You have two choices when it comes to changing your habits; you can create a new habit altogether or you can choose to change an existing habit.

Habits are formed as a result of something called a habit loop. Within the habit loop, there are three components, the cue, the behavior and the reward. Neurological pathways are formed as habits are formed. Habits actually change your brain. Needless to say, this takes time. Most studies show that forming a new habit takes a minimum of three weeks. Cues or triggers are the signal to the behavior that is the habit. Changing an existing habit will involve using an existing cue. For instance, you’re bored, so you find yourself mindlessly snacking. Boredom is the cue, snacking is the behavior or habit.

Whether you choose to change an existing habit or to create a new habit, taking a closer look at your routines and changing them where necessary is a step in the right direction. All of us could benefit from more self-analysis. If you notice that you’ve formed a habit that doesn’t enrich your life or that negatively affects you, taking steps to rewire your brain will only lead toward self-improvement.

When It Comes To Programming Habits, Smaller Is Better 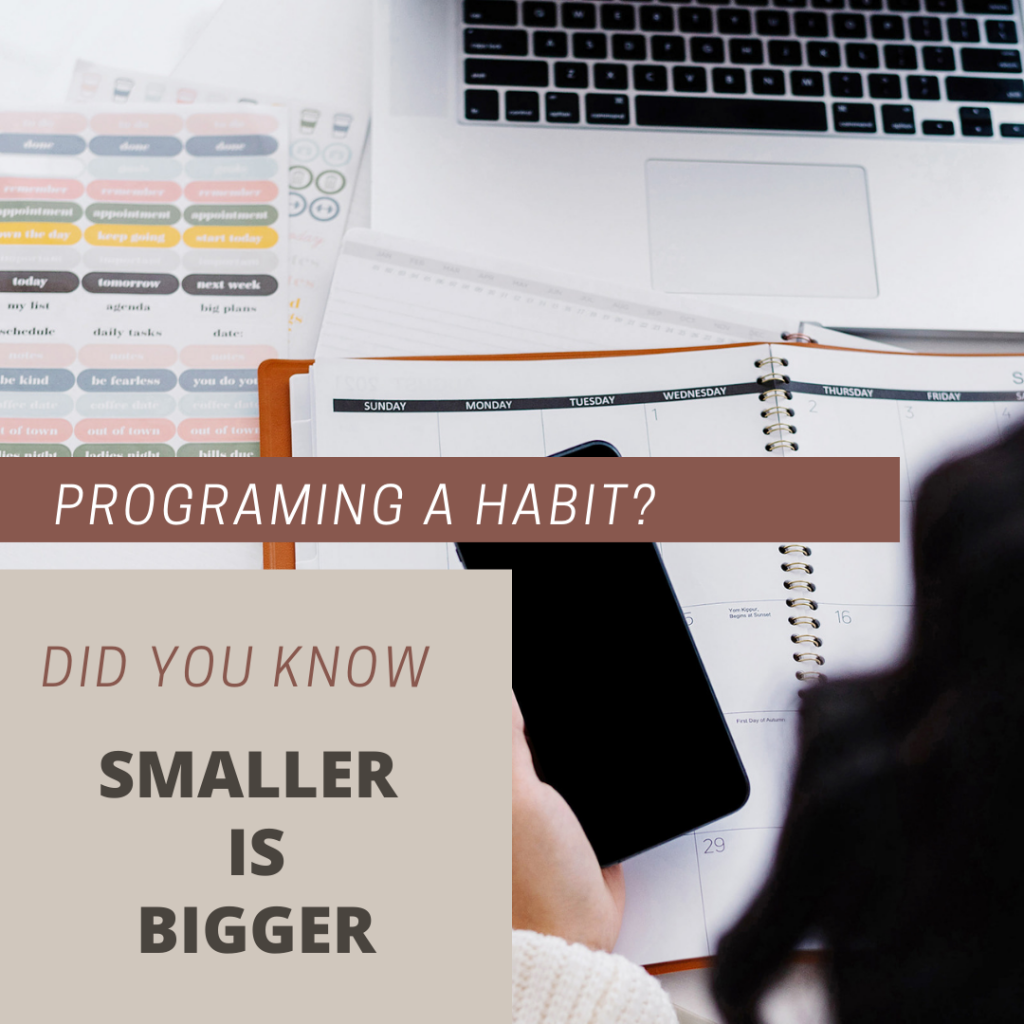 We’ve trained our brains for certain behaviors using repetition and what’s known as “the habit loop.” This loop involves a trigger, a behavior, and a reward. Consequently, changing an existing habit or starting a new habit is pretty difficult. One of the main components to success in doing so is to start small. Using smaller steps that you can build on, will help you avoid slip-ups and enable you to reward yourself more along the way. Both of which enable you to achieve your goal more quickly and at a higher success rate.

When it comes to habits, starting with smaller goals and using them to build up to your ultimate goal is more effective than trying to accomplish the entire goal all at once. These mini-goals should be ones that you can tackle pretty easily. With the achievements that mini-goals allow, there is less room to slip-up. Slip-ups, like not following through or giving up, are decreased when you feel like you’re achieving. An example of this would be, you want to make running a habit and your goal is to be able to run a 5k. It wouldn’t make sense to start out day 1 and try to run 3 miles. It would be better to start small-maybe run half a half-mile and walk the rest of the way, slowly working up to running the full 3 miles. Since the goals are smaller, they’re much less overwhelming, therefore setting you up for better overall success and fewer slip-ups.

Taking smaller steps in order to achieve your ultimate goal will give you the opportunity to reward yourself along the way. Rewards help the brain solidify habits. The more you successfully achieve these mini-goals, the more that specific habit becomes ingrained. One reward that’s easy to use is logging your accomplishments. This not only makes you feel great, but it is also perceived as a reward by your brain. More obvious rewards can also be used, especially when the reward refers directly to the goal. Buy yourself the new pair of running shoes you’ve been holding off on or new earbuds made for running.

Small goals are important when trying to form new and change old habits. Things such as mini-goals and the use of a reward system will help you achieve your goals. Ultimately, turning the mini-goals into full-blown habits that you do every day with little effort.

Did you know the best way to create a programmed habit is to make a plan?