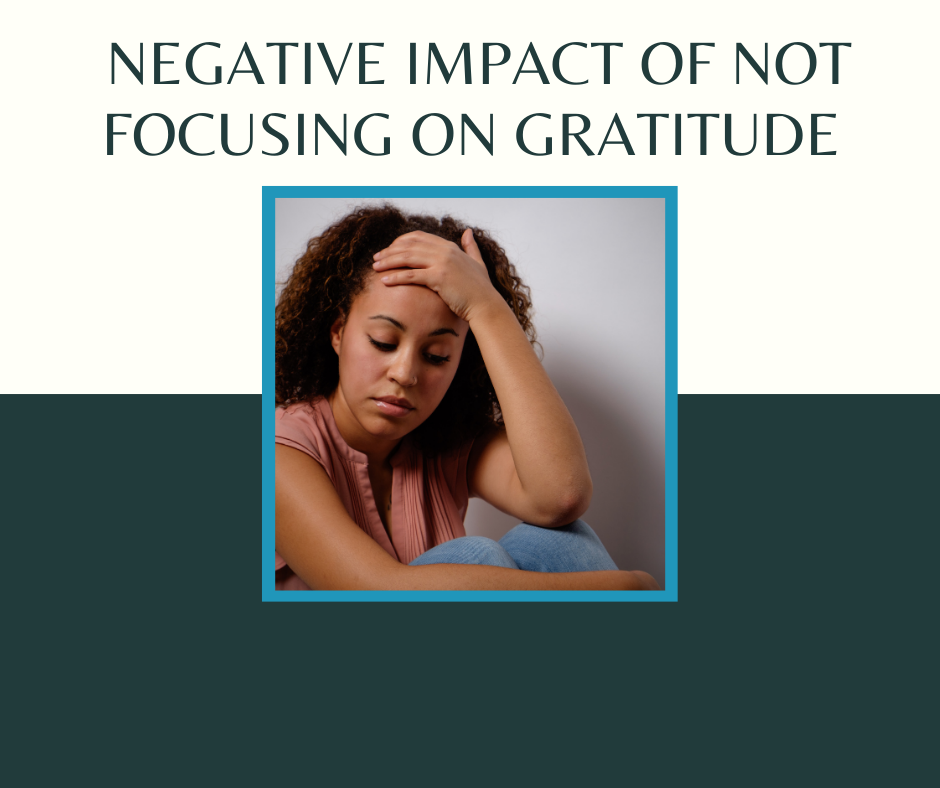 When some people think of gratitude, they think of the Thanksgiving holiday. But gratitude is so much more than an annual holiday. It’s a way of life that can have a deep impact on you.

Just as gratitude can have a positive effect on you; refusing to express gratitude has a host of negative effects including these three problems…

When you focus on what you don’t have, it’s easy to develop a poor self-image. For example, Mary’s parents couldn’t afford to get her braces when she was young. As she grew up, she would look in the mirror and focus on how ugly she thought her teeth were.

Over time, this habit led Mary to develop a poor self-image. Instead of seeing herself as a beautiful work of art, she focused on her flaws. The more she focused on her teeth, the less Mary wanted to take care of herself in other areas. This created a loop of negative thoughts that Mary carried with her everywhere she went.

Emily was in an auto accident with a drunk driver. Although she survived, she was left with long-term nerve damage down the left side of her body. The other driver walked away without a scratch and without ever apologizing.

She waited to have her say in court only for the other driver to get a light sentence. Emily fell into a deep depression. While she suffered every day in pain, the offender walked free and his life was barely impacted.

Then one day, Emily wrote a letter she never sent. In it, she forgave the man who had hurt her so deeply. She decided that day to stop focusing on what the accident had taken from her. Instead, she looked at what it gave her—a second chance at life, a new business that she loved, and a deeper relationship with her husband.

Paying too much attention to what you don’t have can create a negative mindset. It happened to Jody. She followed a leader she admired on Instagram. The woman’s posts seemed to indicate that her life was perfect. She had a beautiful home, a loving husband, a thriving business, and two wonderful kids.

Over time, Jody became friends with the other woman. She was shocked to learn that the leader’s life wasn’t perfect.

The beautiful house was a rental because theirs had been destroyed in a hurricane. The loving husband was seriously ill and in need of caregiving. The woman’s children had life-threatening allergies. The thriving business was in the middle of a messy transition.

When Jody asked why the other woman never shared about these things on social media, the woman shrugged, “Despite it all, I feel blessed. Yes, my life is hard but there’s so much I’m grateful for.”

Don’t allow negativity, bitterness, or a poor self-image keep you from living your best life. Gratitude is a choice and it’s one you can make right now, no matter what’s happening around you.

One way to keep your focus on gratitude is to meditate.